The best knuckleballer over the past 25-30 years….?

Well, I was asked recently on Quora.com: Who was the best knuckleball pitcher in baseball in the last 25-30 years?

A lot of fans are going to come up with the names Charlie Hough and Tim Wakefield. Some might even say Dickey, who won the National League Cy Young Award with the New York Mets in 2012.

I’m going to, however, go with former Indians and Dodgers knuckleball pitcher Tom Candiotti, who was the most consistent knuckleballer over the last 25-30 years. 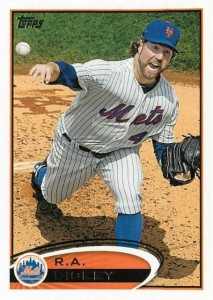 While Dickey had his one big season with the Mets (as well as a couple of other solid campaigns in New York where he pitched well but didn’t get much run support), he has not been that great with the Toronto Blue Jays in 2013-2014. He hasn’t been able to duplicate his success from that 2012 season, which kind of makes him a one-hit wonder.

Wakefield will always be highly regarded in Boston because of his longevity and his being on two World Series championship teams with the Red Sox in 2004 and 2007, but he had some very ugly seasons where he pitched poorly. In his rookie year with the Pirates, he was nearly unhittable and was a postseason star as he nearly pitched Pittsburgh into the World Series. However, over his postseason career, he was hit very hard and compiled an overall ERA of 6.75 in 18 career playoff appearances. In his final four career postseason starts, Wakefield was 0-3 with a 10.47 ERA. He especially struggled against Cleveland in the playoffs, allowing at least five runs in each of his three career postseason starts versus the Indians. Yes, he wound up winning 200 regular-season games over a 19-year career, but his ERA was over 4.00 in 15 of those seasons. He had six seasons where his ERA was over 5.00. However, he always seemed to win because of good run support with the Red Sox, as he was 14-13 with a 5.14 ERA in 1996 and 17-8 despite a 4.58 ERA two years later.

As for Tom Candiotti, he pitched 16 seasons in the big leagues, and though he finished with a career losing record and “only” 151 victories, he had an ERA over 4.00 only six times. Candiotti nearly won the ERA title in 1991, finishing with a 2.65 earned-run average that was second in the American League only to Roger Clemens (2.62). Had he allowed just one fewer earned run over the course of that season, Candiotti would have won the ERA championship. In 1993, he finished just 8-10, but suffered from atrocious run support while pitching for the Dodgers. That year, he was the ERA leader in the major leagues, pitching to a 2.43 earned-run average entering September before struggling in the season’s final weeks to finish at 3.12. In fact, for a full decade from 1986-1995, Candiotti had a 3.44 ERA, which was one of the best earned-run averages in baseball during that stretch. He also averaged 30 starts and over 200 innings during that decade, proving to be a very dependable pitcher for his clubs. He and Mark Langston were the only pitchers in the majors to work at least 200 innings in each season from 1986-1993, until the 1994 strike ended both streaks. His career ERAs after the 1995 season were 3.51 in the American League and 3.38 in the National League. Of his 151 career wins, 70 came in starts where he allowed one run or none. Even though he threw the knuckleball primarily during his career, he consistently had a 2-to-1 strikeout-to-walk ratio, meaning he consistently had twice as many strikeouts as he did walks.

Yes, R.A. Dickey was 12-1 with a 2.15 ERA at one point during the 2012 season, and Tim Wakefield started 14-1 with a 1.65 ERA in 1995. However, Candiotti had similar brilliant stretches of pitching…but not the gaudy won-loss records to show for them because the quality of his teams. In 1991, for instance, Candiotti had a 2.01 ERA in his first 19 starts…but only a 9-8 record and was left off the AL All-Star team. In 1993, he had a 1.53 ERA over a stretch of 17 starts, but was 6-1 with 10 no-decisions. The same summer when Wakefield made all the headlines in Boston with that 1.65 ERA in 1995, Candiotti had a stretch of 13 starts where his ERA was 1.74 for Los Angeles. Alas, the Dodgers gave him very little support, resulting in a 4-6 record in that stretch. Naturally, over time his accomplishments are no longer remembered.

Tom Candiotti never truly got any recognition because of the losing records he suffered while pitching for bad teams in Cleveland and Los Angeles. Had he gotten better support, he would have been better remembered. Or, if he had pitched today and gotten the same results, he would be talked about as a hard-luck pitcher because the baseball media now weigh more importance on other statistics and less on wins. During Candiotti’s time, it seemed that wins-and-losses were the be-all, end-all, and with his losing record he didn’t get as much press. Thus, he is forgotten today. On some lists on the Internet that talk about the best knuckleballers in baseball history, some bloggers cite Candiotti’s best season as 1988, when he was 14-8 with a 3.28 ERA. However, he won 15 games in 1990, nearly won the ERA championship in 1991, and from 1992-95 had the fifth-best ERA in the NL (behind only Greg Maddux, Jose Rijo, Tom Glavine, and John Smoltz). People have forgotten that he was one of the best pitchers in baseball for a while, knuckleball or not.

To learn more about Candiotti and his career, check out his biography titled Tom Candiotti: A Life of Knuckleballs, which is available on Amazon.

First off, congratulations to the Vancouver Canadians and Hillsboro Hops for advancing to the Northwest League Championship Series, which begins on Saturday, September 6th. Vancouver, after finishing ahead of Tri-City for the second-half pennant and sweeping Spokane in the North Division Finals, is gunning for its fourth straight Northwest League title. Hillsboro, meanwhile, is in the finals for the first time in only its second season in the league, after the franchise relocated from Yakima, Washington.

Congratulations to both organizations.

Now, moving on to another topic…. On Quora.com, which is a Q&A website where questions are created, answered, edited, and organized by its community of users, I was recently asked the following question:

Here was my response on Quora:

Very few pitchers throughout the history of baseball have mastered the art of throwing the knuckleball, which is a difficult pitch to learn. It is also a difficult pitch to hit as well, as even the best hitters in the major leagues have trouble with the pitch because they are used to seeing 90-mph fastballs and the knuckler throws their timing off.

Bobby Bonilla was one of many major-leaguers who hated facing Candiotti’s knuckleball.

Tom Candiotti, a knuckleballer who pitched in the majors from 1983 to 1999, told me on several occasions that All-Stars such as Tony Gwynn, Barry Bonds, and Bobby Bonilla always told him they never liked facing him and that knuckleball because it messed up their swing for a whole week after seeing it! Bonilla, a switch-hitter, didn’t want to bat left-handed against the right-handed Candiotti, because he was afraid it would mess up his left-handed swing.

Fred Claire, a former Los Angeles Dodger general manager, also once told me that having a knuckleball pitcher as part of your starting rotation helps to give opposing hitters a different look, to take their timing off. Claire’s Dodgers in the 1990s had only right-handed starting pitchers for several years, and he mentioned having Candiotti on the staff was valuable because his knuckleball broke up the pitching pattern, so that the opposition would be seeing different pitches and different speeds during a three-game series, instead of the same 90-95 mph fastballs all the time. The knuckleball simply messes up hitters’ timing.

The Toronto Blue Jays thought so highly of that knuckleball too that they specifically had Candiotti start Game One of the 1991 ALCS so that he could try to mess up the Minnesota Twins hitters’ timing. So, manager Cito Gaston went with a rotation of Candiotti-Juan Guzman-Jimmy Key-Todd Stottlemyre in that series, with a soft-tossing knuckleballer going first followed by a hard thrower (Guzman), then a soft-tossing finesse pitcher (Key) and another hard thrower (Stottlemyre).

Pat Gillick, the Hall of Fame general manager who acquired Candiotti in Toronto, told me that he liked the change of pace that Candiotti brought to the Blue Jays pitching staff, because he could be put in the rotation in between a guy like Guzman and David Wells, another hard thrower.

Yes, there were other knuckleballers in the major leagues such as the Niekro brothers, Charlie Hough, Tim Wakefield, and R.A. Dickey since the 1960s. But Tom Candiotti was almost just as effective with the knuckleball. To read more about Candiotti’s career, check out Tom Candiotti: A Life of Knuckleballs, which can be found on Amazon.

“Tom Candiotti: A Life of Knuckleballs” has been released

Posted by alifeofknuckleballs in Baseball, Baseball Biography, Knuckleballs on August 12, 2014

In this biography, Candiotti shares his thoughts on being the second player ever to come back from Tommy John surgery, the knuckleball, and losing the ERA title race to Roger Clemens, among other things. Candiotti also discusses some of the favorite pranks he pulled off with David Wells.

Get your copy today

Meanwhile, for a list of McFarland’s Spring 2014 new titles, click here. Their sports 2014 catalogue can be found here, and it contains a discount code that can be used for purchases up until September 1, 2014!

(You can get a 35% discount off your order if you purchase two or more books as McFarland is celebrating their 35th anniversary. Hurry – the offer is good till September 1, 2014. Click on the link provided above to take advantage of this incredible offer!)

Posted by alifeofknuckleballs in Baseball, Baseball Biography on July 29, 2014

Well, an update on the release date of Tom Candiotti: A Life of Knuckleballs…

The index for the book has been completed and the final edits have been done. McFarland will be sending the book to the printers by August 24, 2014, pending those edits and the index that I will be sending over to them.

Here’s the funny part: Before I can send anything, I have to wait and see what Seattle Mariners ace right-hander Felix Hernandez does in his next start this week.

Why is that? Well, it’s because on July 25, “King Felix” tied a long-standing record in the Mariners’ 2-1 loss to the visiting Baltimore Orioles. In that outing, Hernandez fanned 10 Orioles and allowed just one run over seven innings. It was his 13th straight start with seven or more innings and two runs or fewer allowed, tying Hall of Famer Tom Seaver’s 1971 record.

What does that have to do with Tom Candiotti: A Life of Knuckleballs? Well, check out the following image from Page 1:

So, it’s a matter of waiting to see what Hernandez does in his next start so this page can be properly edited to reflect what has happened in 2014. You just never figure that a record like that would be matched – and potentially broken – at an inopportune time like this! Murphy’s Law, I suppose.

Other than that, everything has been completed! Now it’s time to see what “King Felix” does in a couple of days – ironically against one of Tom Candiotti’s former teams, the Cleveland Indians.

Posted by alifeofknuckleballs in Baseball Biography, Knuckleballs on February 8, 2014

“Tom Candiotti: A Life of Knuckleballs” can now be purchased from the McFarland & Company website or through Amazon.com.

For a list of McFarland’s Spring 2014 new titles, click here. Their sports 2014 catalogue can be found here, and it contains a discount code that can be used for purchases up until September 1, 2014!