For one night at least, the new-look New York Yankees have proven some people wrong.

Let’s pick on the Toronto sports media, since I have been crucifying them of late.

As pointed out right here yesterday, some in Toronto have been swinging and missing with their commentary. In particular, I was wondering out loud why the media was suggesting that the Yankees had given up on the season and were looking to “retool” for 2015.

And guess what? On Sunday Night Baseball in Boston on August 3, the Yankees came out swinging and rallied past the Red Sox 8-7 – after Toronto had dropped the last three in its series in Houston – and New York now stands just 1.5 games back of the Blue Jays for the second wild-card spot.

Does the Toronto media think that the Yankees (57-53) can’t make up 1.5 games against the Blue Jays (60-53)? You’ll also notice that the two clubs are tied in the all-important loss column, so if New York wins its three games in hand, both teams would have the same record.

And who were the heroes on Sunday night for the Yankees? If you looked at the box score, two names jump out: new second baseman Stephen Drew (just acquired from the Red Sox before the trading deadline) and reliever Esmil Rogers (the former Jay that was picked up off waivers that same day).

Drew’s two-run single in the fifth drove home the tying runs to make it 7-7, setting the stage for Brett Gardner’s game-winning homer an inning later. Penciled in at the No. 8 spot in the Yankee lineup, Drew also had an RBI double in the fourth, and finished the night 2-for-4 with four runs batted in. (Wow, another former Red Sox player returning to Boston and do damage against them. Haven’t we seen that movie before?)

As for Rogers, who was making his Yankee debut? Three hitless innings with a walk and three strikeouts to pick up his first victory as a Yankee.

I wonder what the media – especially those in Toronto – are going to be spinning in the upcoming weeks as the Blue Jays continue to unravel while the Yankees – again, a team that I can’t even stand – remain in contention.

And oh, PS: The guy that you took pot-shots at, Scott Feldman, threw a complete game against your slugging/home run-hitting lineup, while your rookie phenom lasted just three innings. Just saying. 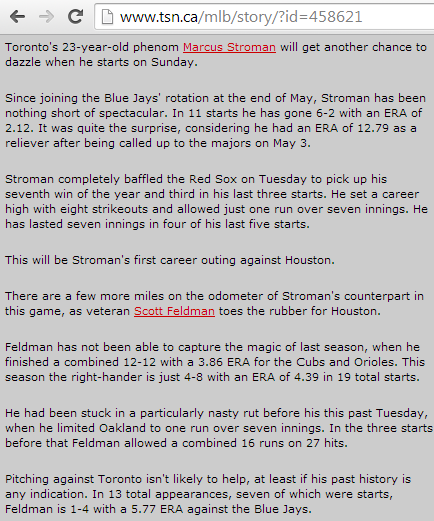 “Tom Candiotti: A Life of Knuckleballs,” a biography of former big-league pitcher Tom Candiotti, will be released in July of 2014. You may pick up a copy either from Amazon.com or through the McFarland & Company website.

This entry was posted on August 4, 2014, 6:48 am and is filed under Baseball, Blue Jays Baseball. You can follow any responses to this entry through RSS 2.0. You can leave a response, or trackback from your own site.