The 1988 Dodgers: Reliving the Championship Season is now available on Amazon.com and the Rowman & Littlefield publisher website. 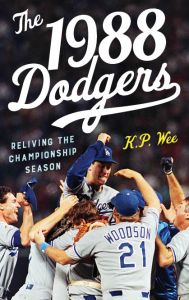 Orel Hershiser IV…Kirk Gibson…the irrepressible Tom LaSorda…you know all about them. But Rick Dempsey, Mickey Hatcher, and Danny Heep—aka “The Stuntmen”—not so much. Now, thanks to K. P. Wee’s The 1988 Dodgers: Reliving the Championship Season, you will. This is the story of a very improbable and, yes, lovable bunch, the last LA Dodger squad to win a championship.
— Bob Ryan, Boston Globe, ESPN

The book is due to be released in August 2018, but all you sports fans out there can pre-order now! What a great gift for the baseball fan in your family!

This entry was posted on February 9, 2018, 6:01 am and is filed under Baseball, Dodgers Baseball. You can follow any responses to this entry through RSS 2.0. You can leave a response, or trackback from your own site.