Knuckleballs and forkballs: Candiotti vs Morris

A few days earlier, It’s Pronounced Lajaway had a piece on the greatest Indians players to never make an All-Star team.

As It’s Pronounced Lajaway noted, Candiotti especially deserved an All-Star nod back in 1991:

As I’ve referenced in other posts in the past, Candiotti’s Tribe career was pretty impressive in hindsight. He posted an ERA+ over 125 in three of his six seasons in Cleveland. If you think Kluber got snubbed this year, check out Candiotti’s situation from 1991. With a 2.23 ERA in 17 starts (6th best in all of baseball), Candiotti was left off the roster. Meanwhile, due to postseason heroics which almost got him into the Hall of Fame, some guy named Morris started the game for the AL—with the 43rd best ERA in baseball at 3.65.

Of course, as I had posted here recently too, Candiotti would have made the American All-Star team had he not been traded to Toronto a mere 10 days prior to the Midsummer Classic.

I want to focus here on Candiotti vs Morris, though, since it was brought up on It’s Pronounced Lajaway.

Candiotti normally struggled in first innings of ballgames because it took a few frames for him to get the feel for the knuckleball, but interestingly, Morris was even worse in his 21-win season with Toronto in 1992. That season, Morris had a 6.88 ERA during the first innings of his 34 starts, allowing 26 earned runs and 14 extra-base hits. In 1991, Candiotti gave up 15 first-inning runs in 34 starts, for a 4.01 ERA, and nine extra-base hits. But Candiotti’s first-inning ERA was skewed because seven of those runs came in the one game where he received multiple for a bad tooth just prior to taking the mound. In any event, Morris’s 6.88 ERA in the first inning in 1992 was a lot worse.

Former major-league pitcher Jim Kaat, working the broadcast booth for CBS during the 1992 postseason, explained Morris’s first-inning woes this way during Game One of that year’s ALCS: “When you throw the forkball, it’s difficult to find the release point” and get that pitch in the strike zone early on. The idea that it took a few innings for Morris to see if his forkball was sharp or his fastball was effective, before he decided which pitch to go with. So, essentially, it took Morris a few innings before he settled down. And once he had his pitches working, he’d be untouchable the rest of the game.

That’s not all. As Kaat also pointed out, because of Morris’s high leg kick and the use of the forkball, the ball took a longer time to get to home plate, making Morris easy to steal bases on throughout his career. In fact, Morris was one of the easiest pitchers to steal on in the AL during that 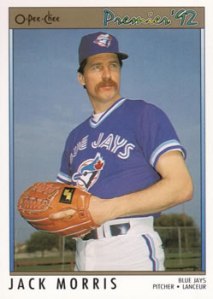 Wait a minute. Morris had a tendency to struggle in the first innings of ballgames. Because he threw a forkball, Morris was easy to run on. Those two characteristics were consistent with knuckleball pitchers such as Candiotti and Charlie Hough. So, why did knuckleballers get more scrutiny than a guy who threw a forkball?

Hough himself wondered the same thing during the spring of 1992, some five months after Morris had captured World Series MVP honors with Minnesota. “Some managers would say they wouldn’t have a knuckleballer on the staff with all the wild pitches and passed balls,” Hough told the Chicago Daily Herald, referring to the negative perception toward knuckleball pitchers. “But there are more wild pitches on a forkball or a splitter. If Jack Morris throws a wild pitch or passed ball and gives up a big run on it, it’s all right. But when I do it, it’s the god-darned knuckleball” (Mark Ruda, “Is the Knuckleball a Dying Art? Not on the White Sox,” Chicago Daily Herald, April 5, 1992).

Round-trippers? Six times, Candiotti finished in the top 10 in the league in fewest home runs allowed per nine innings. He never led the league in homers allowed, finishing in the top 10 only twice, including a career high of 30 allowed in 1998. Morris was in the top 10 in homers allowed seven times, and had seasons in which he allowed 37, 30, 40, and 39 long balls. So, Candiotti owned low home run and walk rates—and managers didn’t like a pitcher like him because…?

In Game One of the 1992 ALCS, Morris had an atypical flawless first inning against the Oakland A’s. But his early-inning woes would bite him in the second frame, as he allowed three runs – including back-to-back homers – and Toronto went on to lose 4-3. In Game Four, he allowed five runs in the third inning as the Blue Jays trailed 6-1 entering the eighth. Oakland seemed destined to win that contest to even the ALCS at 2-2, but the 1992 Jays weren’t the same team as the offensively-challenged ’91 club.

The ’92 Jays were a more balanced team, and it was no cakewalk to go through their lineup. John Olerud and Candy Maldonado had solid seasons, and Toronto also had a legitimate designated hitter in Dave Winfield. (The DHs in the 1991 ALCS were a combined 2-for-18 after putting up horrendous regular-season numbers.) With Winfield hitting behind him, Joe Carter saw more fastballs because pitchers didn’t want to walk him and have to deal with the dangerous Winfield with runners aboard. 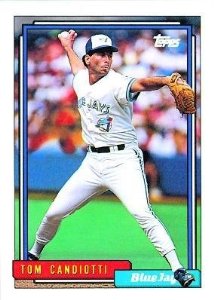 n 1991, if the Jays were trailing by that kind of a margin – 6-1 in the eighth inning – the game was essentially over since they didn’t have much of an offense beyond White-Alomar-Carter atop the batting order. No such problem in 1992. An Alomar double and Carter single cut the deficit to 6-2. Winfield then singled Carter to third, prompting A’s manager Tony La Russa to bring in closer Dennis Eckersley. It didn’t matter. Olerud and Maldonado each smacked RBI singles to make it 6-4. An inning later, Toronto tied it off the seemingly invincible Eckersley, and then prevailed 7-6 in extra innings.

The ’92 Blue Jays would win the AL pennant before stunning Atlanta in six games in the World Series. And oh, Morris lost twice against the Braves.

Though Jack Morris defeated Candiotti’s Blue Jays twice in the 1991 ALCS, the Candy Man has nothing but praise for the right-hander.

“Jack Morris was the greatest competitor I’ve ever seen on a big-league mound,” he said several years ago on the subject. “Jack might not have had an outstanding ERA, but he had this refuse-to-lose mentality and was definitely a big-game pitcher. The bigger the game, the better Jack was. He could beat you 1-0 or he could beat you 10-9. He always wanted the ball and he never wanted to come out of the ballgame. That’s what you want out of your starting pitcher. That’s the guy I’d want on the mound for a seventh game in the World Series.

“Not only was he the best clutch pitcher I’ve ever seen, but Jack also threw an amazing split-fingered fastball, which was the best splitter in the game. It approached the plate looking like a fastball, but it really dipped when it got to the plate. I know I wouldn’t have wanted to hit against that splitter of his.”

Candiotti never stepped into the batter’s box against Morris, but opposed him on the mound quite a few times. Sure, Candiotti was only 1-8 lifetime in their nine career matchups, but several of the games were very close. During the Cleveland years, he was 1-5 despite a respectable 3.67 ERA. “Jack was with the Tigers for most of those years,” Candiotti said. “It seemed like I faced him a lot when we were playing against Detroit, and he was always one pitch better than me.”

That was certainly the case in both of their 1987 matchups. On August 23, Candiotti should have had a shutout but his defense betrayed him, and the Tigers took advantage and won the game in a span of four pitches. In the third inning, Detroit had runners on the corners with one out when Darrell Evans hit what looked like an inning-ending double-play grounder to Joe Carter at first base. Alas, Carter’s throw to second base went into leftfield as everybody was safe. One run scored, and there were still two runners on. Kirk Gibson, the next batter, smacked a three-run homer and the Tigers would prevail 4-3 behind Morris. “I threw Gibby a knuckleball the pitch before, and he missed it by a foot,” Candiotti recalled. “I threw him another knuckler but it stayed up a little bit, and Gibby just absolutely crushed it. We lost that game but it easily could’ve been a shutout, because they didn’t come close to getting another run.”

Ten days later, Candiotti threw a one-hitter in Detroit, but Carter booted a ball at first base which led to a run, and Morris’s Tigers won 2-1. Though the error cost him the game, Candiotti was quick to jump to his teammate’s defense. “That year,” he recalls, “part of the problem was there weren’t any set positions for a few players. Joe wasn’t out there trying to make an error. He was out there trying his best, but it was tough when he’d play first base one day, then move over to leftfield the next, back to first again, and then to rightfield. It was tough for a few of the guys not having a set position.”

One time, it was because of a catcher’s unfamiliarity with Candiotti that cost him a game against Morris.

Joel Skinner, who was traded to Cleveland before the 1989 season, had caught Yankees knuckleballer Joe Niekro five times from 1986-87. However, for the first five months of the ’89 season with the Indians, he’d caught Candiotti just once – way back in April – because Andy Allanson was the Candy Man’s personal catcher. In September, though, interim manager John Hart wanted to see what Skinner could do behind the plate, and inserted him into the starting lineup in a game against Morris.

“Skinner warmed me up in the bullpen before the game, and did just fine,” recalled Candiotti. “But with the knuckleball, though, is it’s different in the game than it is warming up on the sidelines. When the game began, he was using a regular catcher’s glove – instead of the big knuckleball glove that catchers wear to catch a knuckleball pitcher*.”

Gary Pettis led off with a single, stole second, and moved to third on a passed ball. Candiotti then fanned Fred Lynn but Skinner couldn’t hang on to the third strike, which got away for another passed ball, allowing Pettis to score. “After that inning, Skinner switched to the big glove,” said Candiotti. “And he did a great job the rest of the way. In fact, he was terrific in handling my knuckleball whenever he caught me [from that moment on].” Despite Candiotti’s solid game – two earned runs over 6.2 innings – Morris was victorious 3-1.

Morris would compile a 26-8 record against Cleveland by the time Candiotti finally beat him in 1990. “It seemed every time I pitched against Detroit, I got matched up against Jack. He had an amazing record against us, especially at Tiger Stadium. He just beat us every time. I go, ‘Well, somebody’s gotta take this punishment. It might as well be me.'”

Though Morris said years ago he didn’t need luck to beat Candiotti, based on some of those games it seemed like he did.

*Skinner wasn’t the only catcher who learned the lesson the hard way. When Dodger catcher Carlos Hernandez first caught Candiotti during spring training in ’92, he didn’t want to use the big knuckleball glove – and soon regretted that decision. “Carlos was catching me in the bullpen and he was just using a regular catcher’s glove,” said Candiotti. “I threw my hard knuckleballs and a few of them hit him. After that, he gave up and went with the bigger glove.” With the oversized glove, Hernandez missed only three of Candiotti’s pitches during the entire game.