No run support in milestone start…

On July 12, lefty Paul Maholm got his first start in two months and pitched his best game of the season, in the Los Angeles Dodgers’ 1-0 victory over the San Diego Padres.

For Maholm, it was his first start since a 3.2-inning, 10-run disaster against the Miami Marlins on May 14, and also his 250th career major-league start. The lefty tossed six-plus shutout innings of two-hit, no-walk ball against the Padres, and the Dodgers won it in the bottom of the ninth off San Diego rookie Kevin Quackenbush [1].

Because the Dodgers couldn’t score when Maholm was still in the game, he received a no-decision to remain 1-4 on the season, though his ERA dropped from 5.18 to 4.69 [2].

Of course, Maholm hasn’t had a good season so far, with a 4.74 ERA as a starter and an equally-mediocre 4.58 earned-run average as a reliever. But hey, if you pitch into the seventh inning and give up just two hits, you deserve a win, right? Especially in a milestone appearance, such as Maholm’s 250th career big-league start.

Then again, sometimes in baseball you have certain pitchers who just don’t seem to have any luck, even when they pitch well.

I remember lefty Brian Bohanon’s 1998 season when he was acquired by the Dodgers in mid-July from the New York Mets in exchange for veteran reliever Greg McMichael. At the time, eyebrows were probably raised, because Bohanon hadn’t had a stellar career up to that point (and wouldn’t the rest of his days in the big leagues after that ’98 campaign) [3]. 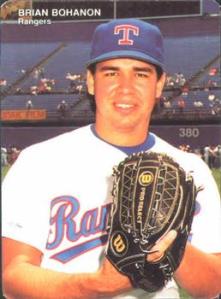 Yet, with the Dodgers in 1998 following the trade with the Mets, Bohanon was immediately inserted into the starting rotation, and the veteran lefty somehow delivered. He logged a 2.40 ERA in 14 starts, tossing two complete games. In 97.1 innings, he allowed only 74 hits and struck out 72 batters.

The problem? The Dodgers couldn’t score for him. As a result, Bohanon was only 5-7 with the Dodgers. Also, as mentioned above, he tossed two complete games with Los Angeles – but he lost both games. On September 11, Bohanon pitched eight innings of seven-hit ball with eight strikeouts in San Diego, but the Dodgers lost 1-0 to Padres righty Joey Hamilton. In his final appearance of the season – and as it turned out, his final game with the Dodgers – he gave up only three runs over his nine innings of work, but lost a 3-2 decision to San Diego right-hander Andy Ashby.

Following the season, he joined the Colorado Rockies, where he would pitch his final three major-league seasons. Though he won 29 games for the Rockies, he also lost 30 and pitched to a 5.82 ERA with Colorado.

There’s also lefty Odalis Perez – who like Maholm also used to pitch for the Braves. Sure, Perez was mediocre toward the end of his career. But he also won 15 games for the Dodgers in 2002, his first season in Los Angeles. Two years later, he logged a 3.25 ERA in 31 starts, but managed just a 7-6 record as the Dodgers scored two runs or fewer for him 10 times.

Then there was Tom Candiotti, who on June 16, 1995, made his 300th career major-league start and pitched eight shutout innings of three-hit ball at Wrigley Field. He also took a no-hitter into the sixth in his matchup against Cubs right-hander Steve Trachsel, who at that point in his career was known for his inability to win at home. Alas, the Dodgers couldn’t score at all, and Howard Johnson’s two-run homer in the bottom of the ninth off Rudy Seanez won it 2-0 for the Cubs.

A no-decision for Candiotti despite pitching shutout ball in a milestone start – much like Paul Maholm back on July 12 this year. And that was the type of season for Candiotti, who despite a 3.50 ERA went 7-14.

Sometimes that’s how things are in baseball. Some pitchers are just plain unlucky. Paul Maholm surely knows the feeling.

[1] The Dodgers would beat the Padres by the same 1-0 score the following afternoon to take three of four in the series.

[3] Another interesting part of the deal was that McMichael began the season with the Mets and was traded in early June to Los Angeles with Dave Mlicki for former Atlanta teammate Brad Clontz as well as Hideo Nomo. Just a month later, McMichael was sent back to the Mets for Bohanon. Mlicki, by the way, was 7-3 with the Dodgers despite a 4.05 ERA in his 20 starts. Probably best known for tossing a shutout in 1997 in the first-ever interleague regular-season game between the Mets and Yankees, Mlicki did throw a complete-game shutout in Colorado while with the Dodgers in ’98, though.

[4] It should be noted, though, that three of his losses came during a stretch from May 31 to June 20, when he really struggled. In that five-start span, Valdez was 0-3 with a 6.41 ERA, with the Dodgers losing four of those games. On June 20, he was chased after only 5.1 innings despite being staked to a huge 7-0 lead against the Giants, a game which the Dodgers eventually won in extra innings.